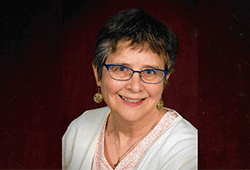 For as long as she can remember, the Society of Jesus has been part of Mimi Krsak's life. Both of Mimi's parents attended Seattle University (then Seattle College) and her mother worked for the college, first as secretary to the president and later as one of two switchboard operators. Her parents counted many Jesuits among their friends.

"My parents had great affection for the Jesuits, and I did not know that other Catholic children didn't spend their summer vacations visiting Jesuit houses so their parents could see their friends," Mimi said. "I just thought that's what all Catholic families did."

Mimi herself has continued her family's longstanding connection with the Jesuits, including receiving both her bachelor's and master's degrees in education from Seattle University. Over the years, she has donated both time and money to Jesuit missions, so when she drew up her estate plan, Mimi had no doubt she would include the Society of Jesus. She has a bequest in her will to Seattle University, Seattle Nativity School, several other Jesuit missions, and to the Jesuits West province itself.

"I realized that it's the Jesuits that brought those schools to Seattle and who have been important to so many aspects of my life," Mimi said. "Giving a gift to the province supports the young men who are in formation right now. To see the loving care that's given to the elder Jesuits, has touched me very deeply. I think this gift is also a way to express gratitude for the work that those men have done their whole lives."

Among those Mimi is honoring with her gift is Fr. John V. Murphy, S. J. After she returned to Seattle following several years of work and travel, Mimi sought counseling. In particular, she said, she was looking for a woman about her age who was Catholic or from another mainline Christian tradition.

The two became friends, and Mimi visited him even after he left Seattle, driving to see him in Portland, then Spokane, and eventually flying to Los Gatos before he died. Also, in Los Gatos were two other Jesuits – Fr. Jack O'Leary S.J. and Fr. Lee Kapfer, S.J. – that she had known from their time at St. Joseph's Church, her parish. Even today, when she goes walking in her Seattle neighborhood, she sometimes runs into Jesuits she knows.

Not only have individual Jesuits impacted her life, Mimi said, but so have specific Jesuit missions and the broader heritage of St. Ignatius of Loyola. She supports the Seattle Nativity School, has attended an Ignatian yoga retreat, prays with the community at Blessed Sacrament in Hollywood via their livestreamed prayer sessions, contributed to a Kickstarter campaign for the children's book, Audacious Ignatius, is active in campus ministry at Seattle University, and has been on Jesuit pilgrimages to Spain, Peru, El Salvador, and the Holy Land.

A retired teacher, Mimi volunteers with the Ignatian Spirituality Project, a program that uses Ignatian spirituality to empower those recovering from homelessness or addiction. She also recently completed two years of spiritual director training in the Spiritual Exercises of Everyday Life.

"It would be impossible to imagine my life without the influence of the Jesuits," Mimi said. "It's not just the Jesuits themselves, but the whole community of people who follow the way of St. Ignatius. I think that's one of the things that is most important to me right now, that the Jesuits are really recognizing that they need to broaden the family. I did the Arrupe seminar at Seattle University, and in his presentation, Fr. Steve Sunborg, S.J. mentioned that the next university president probably won't be a Jesuit. I put that down as the greatest grace of the whole yearlong seminar – to see the Jesuits recognizing they're passing their gifts to lay people and saying, 'You take it and run with it.' I think that's really important."

She concluded, "I can think of no better way to invest whatever is left of my money than to continue this work."